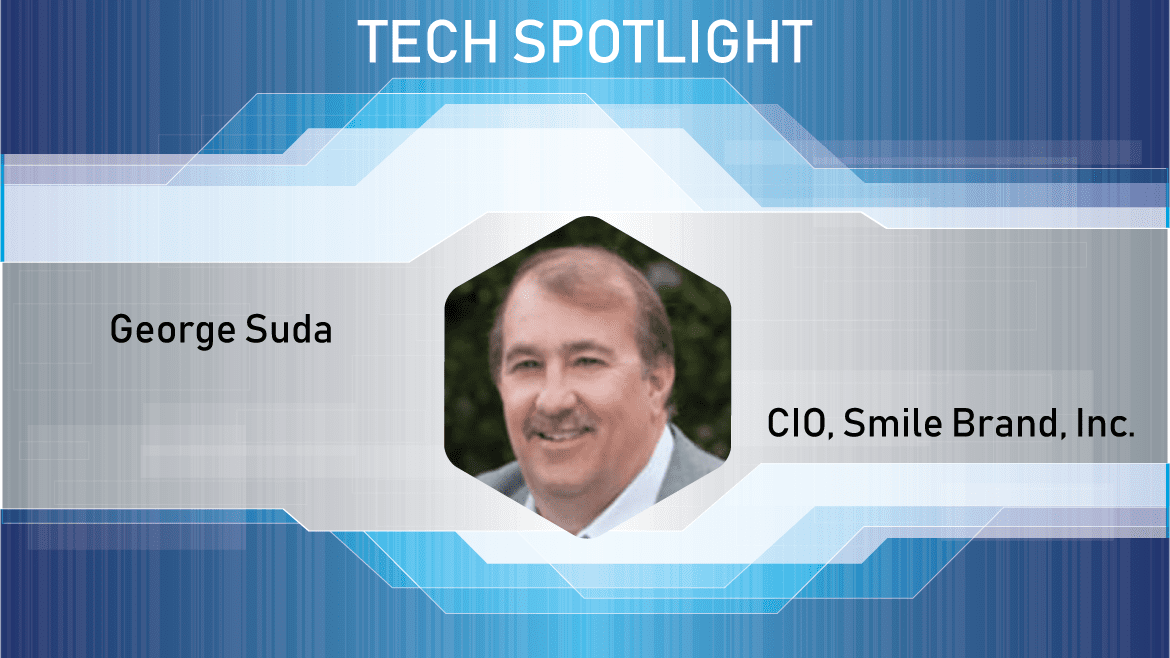 George Suda joined Smile Brands Inc. as Chief Information Officer in January 2008. George is responsible for all of the company’s technological systems and projects, plus he oversees all Central Business Office functions.

In his career George spent 11 years with Apria Healthcare, the country’s leading provider of home healthcare products, ultimately as the Executive Vice President and CIO. In this role George was responsible for managing all aspects of the information services strategy in all 50 states. He was responsible for making significant changes in the billing and collections process that had substantial effect on insurance denials and company Days Sales Outstanding.

George attended Oklahoma State University and earned a bachelor’s degree in business administration from the University of Phoenix and an Executive MBA from Chapman University, where he also received the Beta Gamma Sigma & Dean’s Award as the top MBA student. George continues to be involved at Chapman serving on the Board of Counselors.

Tell us a little about Smile Brand and the role of IT within the company.

We have about 400 offices across the U.S., and the IT department supplies all technical support to those offices including phones, data, management systems, reporting, financials, the whole works. We also support a lot of the x-ray functionalities, since it’s all digital, so we move somewhere in the vicinity of 30,000-40,000 x-rays per day across our network, across all locations. We have all phases of dental from general dentistry to oral surgery, so we have a lot of lines of business across the organization. Our help desk is in Texas of 10 employees, so they’ll call our help desk first.

What did you want to grow up to be when you were a kid?

I wanted to be a pro football player. I played college ball and got injured and that was that. IT wasn’t on my mind but after taking a couple of classes, I thought it was pretty neat.

What kind of messaging is coming down from the CEO/Key Executives about their partnership with IT?  What are they expecting you to look at?

How can we better support them and all processes. We just brought on someone who’s business analytics and process improvement to see how we could use tech to eliminate manual steps and improve processes. We’ve been continually doing a lot of development projects that work directly with the business leaders. I think we shifted more from short term projects to long term projects with the scope of projects expanding fast. We were always aligned with the executives but now we’ve more aligned with the development team to release a lot that is helping the business.

How do you see the role of the CIO changing as IT becomes more essential to business operations?

I think one of the big changes that I see is that IT has definitely gotten more complicated. Some of the traditional solutions we’ve considered in the past aren’t looked the same as they used to be. The decision that we’re making on technology are a lot different and there are a lot more web based solutions for us. There are more hybrid development solutions that are more viable now than they’ve ever been. With pay as you go, it’s a lot easier to do ROI rather than spending millions of dollars so you could scale with multiple applications.

As a CIO, what is your biggest technology challenge or concerns for the upcoming year?

Security is what keeps me up at night. It’s eating up more and more of the budget and we’re seeing more and more threats. It’s what you don’t know; before, security was pretty easy, but now we’ve got cloud based servers all over the place and there are threats coming from every direction. Keeping that environment up and making it top of mind is one of those things that we always have to address. It’s one of those things that we constantly revisit and it takes up a lot of our conversations. A lot of companies think going to the cloud increases security issues but let me tell you: if you think any company can do security better than AWS, you’re wrong. They put more money into security than most companies put in their IT budget.

What’s your take on public cloud vs. on premise?

We are about 60% in the cloud now. We are big proponent of moving stuff to the cloud. In today’s day and age its really difficult to get the skill set with all of the skills you need. We have another push to move data to the cloud in October – November. We do have servers for handling x-rays in our offices we won’t move because if we lose connectivity to the network, we cannot conduct business. That’s why we do have some data that we prefer to keep on premise.

Has the idea of using cloud changed your mindset of using outsourced/Managed Services?

We actually worked with a company to help move us to the cloud and we ended up firing them in three months. You really need to be careful with what you outsource because we don’t want to end up held hostage. We ended up doing things quicker when we did it internally. We do pay a maintenance agreement with Amazon so we get some of their support which has worked fine for us. We use a diverse base of technology and the skills of the managed service provider we tried using just weren’t where we needed them to be.; they tended to push us toward their wheelhouse rather than aligning with our project plan and getting us to where we wanted to be.

Have you had experience hiring millennials? If so how is this different from traditional hiring?

We’re doing a lot of web based java so it fits right into what we they are doing. We’ve hired a couple of people right out of college that have grown with the company. You need to make sure you’re bringing them up; that you are aligning the salary with the skillset of millennials who are adapting quickly and bringing value to the organization. I used to be on the board of counselors at Chapman University and I am close with their dean of the business school, so I’m around young adults frequently.

Do you feel IT still carries the title of a cost center rather than revenue driver?

The closer you get to the business the more of a revenue driver you are. I got the call centers initially because there were problems with them and a lot of what goes on in the call centers is driven by technology. We were able to really put some analytics around it that added technology which allowed us to take more calls with the same amount of reps, driving revenue. To be successful, you need to be either driving revenue or cutting costs, but either way you need to be helping.

If you could give guidance to any CIO, IT Manager Director about how they position their careers what would you tell them?